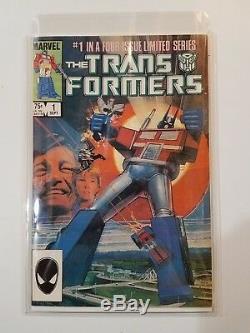 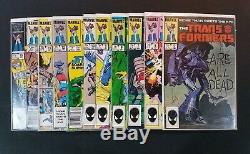 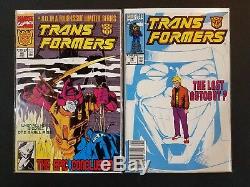 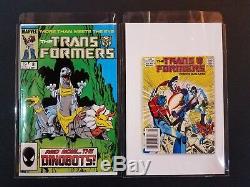 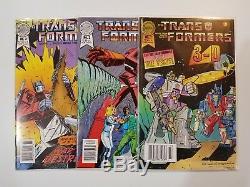 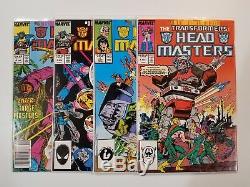 Welcome to your Comic listing for this Awesome Comic Book Set. The Transformers Generation 1 #1-80 VF+ to NM (Marvel, 1984-87) Optimus Prime MUST SEE SET! Starting out as a mini-series, it became very popular and lasted for 80 issues.

The series is now continuing again with IDW's Transformers: Regeneration One series at issue 81. Several million years later, the robots wake up and continue their fight on this strange new world. Ranging from VG/FN to VF+ to NM! #2- VG/FN Fading Spine Creases Break White only rough book in the "84" Collection! #8 - VF/NM, VF, VF- x 3 copies.

Transformers: Universe #1-4 VG+/FN- (Marvel, 1986) #1-3 are Newsstand Edition Not Pictured. Features: Character profiles, ablities, and weakness are listed for the Autobots and Decepticon from Air Raid to Grimlock. The Transformers: The Movie #1-3 VG+ to FN (Marvel, 1986-87) "The Plant Eater" all are Newsstand Editions, Not Pictured. The Transformers 3-D #1-3 NM-/NM (Blackthorne, 1987) #1-NM- No Glasses! The Transformers: Headmasters #1-4 NM- to NM (Marvel, 1987) Ring Of Hate! The Transformers: Headmasters is a four-part mini-series published by Marvel Comics, and is set in the same continuity as The Transformers. It involves the Autobots led by Fortress Maximus and the Decepticons led by Scorponok, and their War on the planet Nebulos. It also introduces the Headmaster, Powermaster, and Targetmaster concept to the Transformers Universe. The Headmasters plot continued in the ongoing Marvel story line with The Transformers #38. Joe Transformers #1-4 FN/FN+ (Marvel, 1986) Blood On The Tracks! #1, 2 and 4 are. The Transformers: Comic Magazine #1 NM- (Marvel, 1987) Digest Size, Never Opened! CHECK OUT MY OTHER TRANSFORMER AUCTIONS GOING ON NOW! Paladins Gate Comics is a small store that loves books and toys. We have 22 years of comic experience and a keen eye for grading. On Fine to Near Mint comics of all ages. You will never receive your comic in an old soiled bag with tape residue and a yellowing dented-up board. We are growing currently our CGC stock so keep checking back for new and exciting books being listed. PHOTOS: We only use actual scans or photos of the items you will receive, no stock photos. We typically use a comic related wrap or Sunday comics paper with woven threat always looks really cool and a printed label with a hero logo. You have any questions please let us know. We always reply back in a timely matter and communicate very well with our customers. We are professional and respect any question or offer you propose related to any item of interest. Thank you for stopping by Paladins-Gate Comics and we look forward to your Business! The item "The Transformers G1 #1-80 VG+ to NM (Marvel, 1984-87) Optimus Prime MUST SEE" is in sale since Thursday, October 18, 2018. This item is in the category "Collectibles\Comics\Copper Age (1984-1991)\Superhero\Other Copper Age Superheroes". The seller is "paladinsgatecomics" and is located in Bloomington, Illinois. This item can be shipped worldwide.