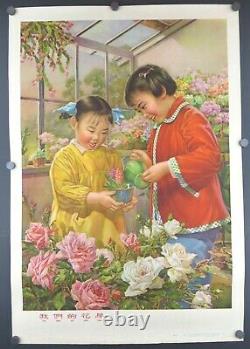 It depicts two young girls in a greenhouse surrounded by beautiful flowers; one is holding a plant while her friend waters it. It was intended to encourage cooperation and helping one another.

This poster dates from a decade before the Cultural Revolution from a period called the Great Leap Forward. The Great Leap Forward (Second Five Year Plan) of the People's Republic of China (PRC) was an economic and social campaign led by the Chinese Communist Party (CCP) from 1958 to 1962.

Chairman Mao Zedong launched the campaign to reconstruct the country from an agrarian economy into a communist society through the formation of people's communes. The poster is a lush, richly-colored, and a very detailed image in the realistic style of a classic retro calendar art. Especially note the realistic depiction of the plants including a Christmas cactus in the upper left corner. This would look great in any setting, but the subject matter might have special appeal to gardeners or for a child's room. This is an original poster it is.

The item comes from a significant, wide-ranging collection of posters and other rare collectibles of the era acquired. 30 years ago from sources in mainland China. These posters were produced to be very much of the moment, printed by the government to convey information to a then widely-illiterate public. Many were intended to depict an idealized vision of the Communist state.

They were not intended to be durable art. Like advertising, they were colorful, pleasing, and meant to be replaced by new posters as they came along.

Therefore, many did not survive. Its possible this may be one of the few remaining copies.

Note: Round objects on the four corners of the poster are magnets holding the poster for photography. Subject: Two girls in a greenhouse Size: 30 inches x 21 inches (76 cm x 50 cm) Year: 1958 Condition: VG++ No stains, no creases; minor age speckling on borders, minimal age foxing. The reverse side has two pieces of white paper repair tape (3" & 5") which expertly and professionally repaired a tear. We tried to photograph the repaired area from the front, but it's too invisible for the camera to catch. Looking at the poster from the front, it's very, very difficult to see the repair unless you're inches away.

Comments: Extremely rare sixty-year-old item that will frame up beautifully! From the 2015 book, Chinese Propaganda Posters by Stefan R. Landsberger: (Through) its long history, the Chinese political system used the arts to propagate correct behavior and thought. Literature, poetry, painting, stage plays, songs, and other artistic expressions were produced to entertain, but they also were given an important (educational) function: they had to educate the people in what was considered right and wrong at any one time.

Once the People's Republic was established in 1949, propaganda art continued to be one of the major means to provide examples of correct behavior. But it also gave a concrete expression to many different policies, and to the many different visions of the future the Chinese Communist Party had over the years. In a country with as many illiterates as China had in the 1940s and 1950s, this method of visualizing abstract ideas and... Educating the people worked especially well.

Propaganda posters, which were cheaply and easily produced, became one of the most favored vehicles for this type of communication. The most talented artists were employed to visualize the political trends of the moment in quite detailed fashion. Many of them had worked on the commercial calendars that had been so popular before the People's Republic was founded...

Their aim was to portray the future in the present, not only showing "life as it really is, " but also life as it ought to be. The content of the posters was largely taken up with the topics of politics and economic reconstruction that dominated China after 1949.

Hyper-realistic, ageless, larger-than-life peasants, soldiers, workers, and youngsters in dynamic poses peopled the images. They pledged allegiance to the Communist cause, or obedience to Chairman Mao Zedong, or were engaged in the glorious task of rebuilding the nation. The item "SUPERB Ultra-rare 1958 Chinese propaganda poster GIRLS IN GREENHOUSE must-see" is in sale since Thursday, October 7, 2021. This item is in the category "Collectibles\Cultures & Ethnicities\Asian\1900-Now\Chinese\Prints, Paintings & Posters". The seller is "global-village" and is located in Duluth, Georgia.