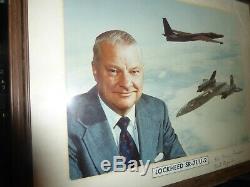 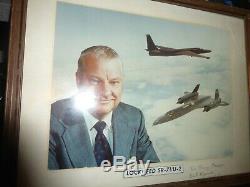 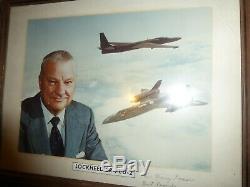 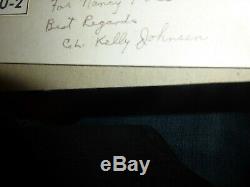 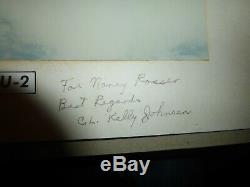 Rare-Genuine-Authentic Signed Photo by Legendary Lockheed "Skunk Works" Aeronautical Engineer C. Kelly Johnson with the SR-71 Blackbird & U2 in background. Photo Size including frame: 14" x 11". Photo is Like New-Excellent framed condition! I was present when he presented and signed the photo when attending a Manager's Club meeting at Lockheed in 1984 when he gave a speech. Clarence Leonard "Kelly" Johnson (February 27, 1910 December 21, 1990) was an American aeronautical. He is recognized for his contributions to a series of important aircraft designs, most notably the Lockheed U-2. Besides the first production aircraft to exceed Mach. 3, he also produced the first fighter capable of Mach 2. The United States' first operational jet fighter. As well as the first fighter to exceed 400 mph. And many other contributions to various aircraft.

As a member and first team leader of the Lockheed. Johnson worked for more than four decades and is said to have been an "organizing genius". He played a leading role in the design of over forty aircraft, including several honored with the prestigious Collier Trophy. Acquiring a reputation as one of the most talented and prolific aircraft design engineers. In the history of aviation.

In 2003, as part of its commemoration of the 100th anniversary of the Wright Brothers' flight, Aviation Week & Space Technology. Ranked Johnson eighth on its list of the top 100 "most important, most interesting, and most influential people" in the first century of aerospace.

Johnson's Lockheed boss, referring to Johnson's Swedish ancestry, once remarked to Ben Rich. That damned Swede can actually see air. Kelly Johnson and Gary Powers. In front of a U-2.

Kelly Johnson-Lockeed- Aeronautical Engineer SR-71/U-2 Signed Photo-Must See" is in sale since Saturday, May 30, 2020. This item is in the category "Collectibles\Autographs\Historical".