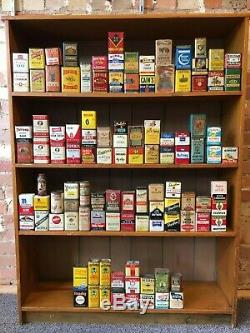 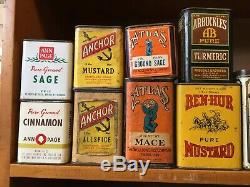 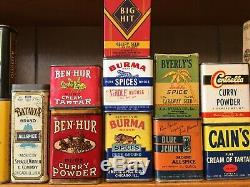 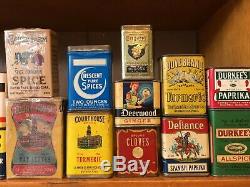 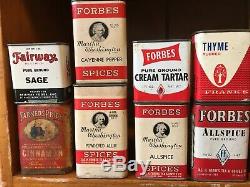 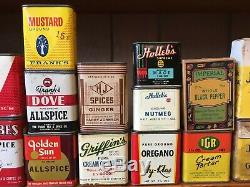 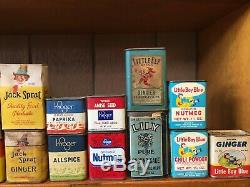 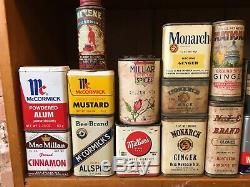 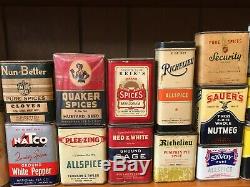 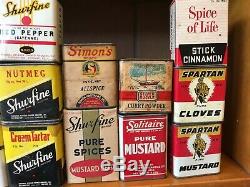 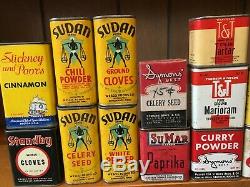 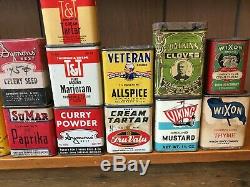 Large antique and vintage spice tin / spice container collection. There are 108 "tins" total to make an instant collection. I say "tins" because some are completely tin, some have cardboard sides with tin tops and bottoms and some are cardboard boxes.

I arranged them on the shelves in alphabetical order but there are some a little out of place for various reasons stacking ability, height differences, etc. I also have pictures as a group and close ups of groups moving left to right and starting in the upper left corner. I only took pictures of one side, so look at the pictures closely and assume that the other side would be in similar condition. I love how these look and it is quite a grouping. There are no two that are exactly alike, but there are versions of the same brand and some, like Sudan, which all look the same but have different spices. There are some common ones and some that are really hard to find, maybe even scarce or rare. They come from all over the United States, some, like Imperial, comes from Grand Rapids, Michigan (local to me) and there are several from Chicago. I also saw some from Oklahoma that I hadn't seen before, but probably because they are West of the Mississippi.

The pictures are pretty good so you should be able to see the labels clearly. To help, I've listed below the brand name of each spice tin, starting from the top row down. Then I listed the name of company that put out that spice following the same sequence, from the top and down. First Row: Ann Page, Anchor, Atlas, Arbuckles, Ben Hur, Batavia, Big Hit, Burma, Byerly's, Blue Jewel, Centrella, Cain's, Clover Farm, Court House, Crescent, Conquest.

The item "Antique & Vintage Spice Tin Collection 108 Total Tins Hard to Find, Must See" is in sale since Thursday, November 14, 2019. This item is in the category "Collectibles\Advertising\Merchandise & Memorabilia\Tins". The seller is "macatawabay" and is located in Holland, Michigan. This item can be shipped to United States, all countries in Europe, Canada, Japan, Australia.